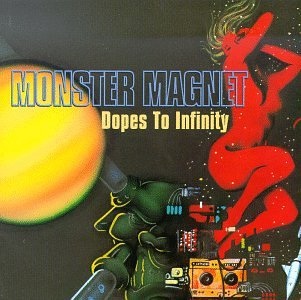 Expecting Monster Magnet to change from art-sludge-psych monsters into sweet cuddlebunnies from album to album clearly demonstrates a loss of reason. Wyndorf himself doesn't need to worry about losing his reason in particular, given how psychotically entertaining his band already is, and Dopes to Infinity is about as far apart from Superjudge as the original Siamese twins were to each other. Maybe "Dopeheads to Infinity" would have been the better title, but as the title track fires up into another rampage of excessively flanged guitar, storming lead riff, and steady drum stomp, all criticisms get left behind along with any sort of sanity. Wyndorf's singing is a touch crisper in the mix this time out, while the guitar playing is even more powerfully direct and epic amidst all the space-out swirl and rockets to the moon. It's the secret weapon of the album as a whole, turning Monster Magnet's gift for the large scale into something that's almost uplifting, often connecting with a listener instead of dominating one. That Mellotron ("Look to the Orb for the Warning") and strings (the acoustic guitar-led "Blow 'Em Off") are evident along with the sitars, folky strums, and similar acid quease of past albums only makes sense as a result. Then again, songs like "Ego, the Living Planet" and "Theme From 'Masterburner'" do a great job at sounding like Thor battling Galacticus for control of the universe -- no puny humans allowed. Lead single "Negasonic Teenage Warhead" became a minor hit, all the more surprising given how the band's idea of a commercial single features more processed guitar backing Wyndorf on the verses than the law normally allows. The catchy chug and scream of the chorus helps nail it, though, showing that Wyndorf can find the balance between his extreme and less-so sides when desired.

Amazon Review
One of the last great heavy metal/psychedelic combinations, the early '80s tour "Black & Blue" featured Black Sabbath and Blue Oyster Cult laying waste to stoned freaks nationwide. First you'd get blitzed by BOC's post-Armageddon, intellectual metal space show--"Don't Fear the Reaper", "Godzilla", and so on--and then, while everyone's brains were still reeling from too much rat weed and cheap booze, Sabbath would come out and bash everyone square between the eyes with two-ton riffs. Black and blue indeed. The members of Monster Magnet no doubt took in a few of these shows as whelps and have absorbed and regurgitated everything that made that tour so great on their record "Dopes to Infinity". Witness some of the heaviest riffs you'll ever hear, and be dazzled by subtle acoustic numbers and instrumental wizardry. And if that's not enough for you, they've even thrown in a certified hit in "Negasonic Teenage Warhead", equal amounts BOC's "Godzilla" and Cream's "White Room." Like Kyuss and Corrosion of Conformity, Monster Magnet has suckled at Sabbath's teat, and though they owe the Sabs their existence, they've grown up and created their own vision. This is by far the best, most fully and successfully realized Monster Magnet record and will no doubt stand as one of the classic psychedelic metal albums of all time. "--Adem Tepedelen"