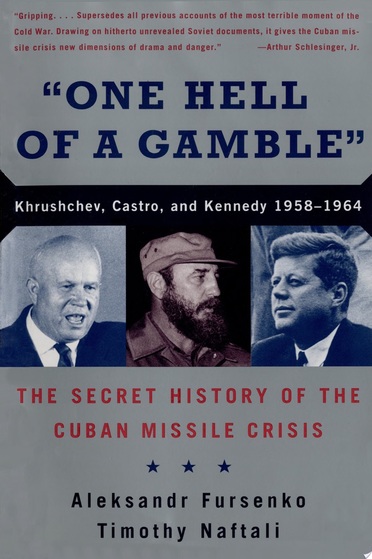 "One Hell of a Gamble"

Based on classified Soviet archives, including the files of Nikita Khrushchev and the KGB, "One Hell of a Gamble" offers a riveting play-by-play history of the Cuban missile crisis from American and Soviet perspectives simultaneously.

No other book offers this inside look at the strategies of the Soviet leadership. John F. Kennedy did not live to write his memoirs; Fidel Castro will not reveal what he knows; and the records of the Soviet Union have long been sealed from public view: Of the most frightening episode of the Cold War--the Cuban Missile Crisis--we have had an incomplete picture. When did Castro embrace the Soviet Union? What proposals were put before the Kremlin through Kennedy's back-channel diplomacy? How close did we come to nuclear war? These questions have now been answered for the first time. This important and controversial book draws the missing half of the story from secret Soviet archives revealed exclusively by the authors, including the files of Nikita Khrushchev and his leadership circle. Contained in these remarkable documents are the details of over forty secret meetings between Robert Kennedy and his Soviet contact, records of Castro's first solicitation of Soviet favor, and the plans, suspicions, and strategies of Khrushchev. This unique research opportunity has allowed the authors to tell the complete, fascinating, and terrifying story of the most dangerous days of the last half-century.