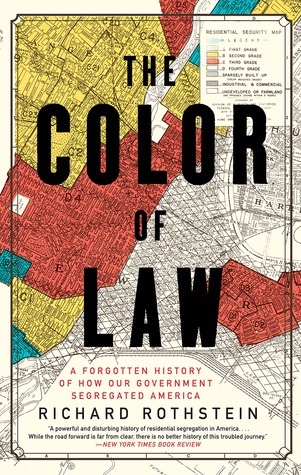 The Color of Law: A Forgotten History of How Our Government Segregated America

Heralded as a ‘masterful’ (Washington Post) and ‘essential’ (Slate) history of the modern American metropolis. ‘The Color of Life’ is a groundbreaking investigation into how U.S. governments in the twentieth century deliberately imposed racial segregation on metropolitan areas nationwide.

Lauded by Ta-Nehisi Coates for his ‘brilliant… [and] fine understanding of the machinery of government policy’ (Atlantic). Ricahrd Rothstein has painstakingly documented how our cities - from San Francisco to Boston - became so divided. Rothstein describes how federal, state, and local governments systematically imposed residential segregation: with undisguised racial zoning, public housing that purposefully severed previously mixed communities, subsidies for builders to create whites-only suburbs, tax exemptions for prejudiced institutions, and support for violent resistance to African Americans in white neighborhoods. Rothstein demonstrates how police and prosecutors brutally upheld these standards, and how such policies still influence tragedies in place like Ferguson and Baltimore. With painstaking research, ‘The Color of Law’ forces us to face the obligation to remedy our unconstitutional past.