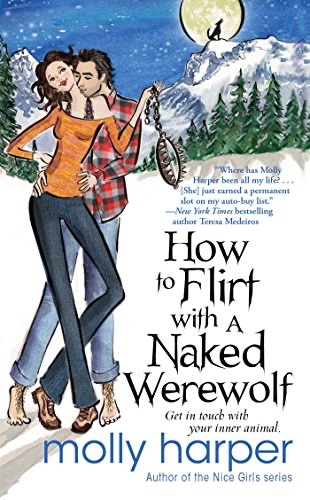 How to Flirt with a Naked Werewolf

Northern Exposure
Even in Grundy, Alaska, it’s unusual to find a naked guy with a bear trap clamped to his ankle on your porch. But when said guy turns into a wolf, recent southern transplant Mo Wenstein has no difficulty identifying the problem. Her surly neighbor Cooper Graham—who has been openly critical of Mo’s ability to adapt to life in Alaska—has trouble of his own. Werewolf trouble.
For Cooper, an Alpha in self-imposed exile from his dysfunctional pack, it’s love at first sniff when it comes to Mo. But Cooper has an even more pressing concern on his mind. Several people around Grundy have been the victims of wolf attacks, and since Cooper has no memory of what he gets up to while in werewolf form, he’s worried that he might be the violent canine in question.
If a wolf cries wolf, it makes sense to listen, yet Mo is convinced that Cooper is not the culprit. Except if he’s not responsible, then who is? And when a werewolf falls head over haunches in love with you, what are you supposed to do anyway? The rules of dating just got a whole lot more complicated. . . .