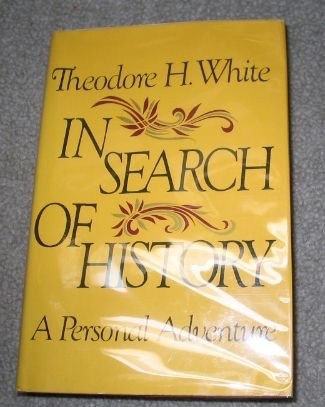 In Search of History: A Personal Adventure

In Search of History, by Theodore H. White is an excellent and well written book chronicling not only the life of this astounding reporter and writer, but also giving you an inside view into the U.S. from his birth in 1915 to the publishing of the book in 1963. In his early years (1915-1938) he details to a full extent the Boston in which he grew up, as well as going into a small extent about New England and the rest of the U.S. In these few fascinating chapters, he details the history of immigration to the U.S., and how the various ethnicities and neighborhoods functioned. For me in particular, who was only born in the last decade, this view of an America long gone and far removed was both fascinating and informative.
In the next section, after completion of his education and after receiving employment as a reporter from Harry Luce at Time, White travels to Asia (1938-1945) to detail the three way struggle between the Japanese, Chiang K'ai-Shek (and his Nationalist forces), and Mao Tse-tung (and his Communist forces), with the U.S. supporting K'ai-Shek. While this era in China is all common knowledge and part of history, to see it the way that White writes it is to see it in an entirely new light. An example of this is when White takes the reader into the party conference (Communist), and reveals many details of Communist thinking that are rather unknown in the West. Also, here, as in almost any situation, White managed to ease his way into the confidence of these men of power, and therefore many parts of what he reveals in this book are not well known, such as how close the U.S. actually came to acieving harmony between the Nationalist and Communist forces. However, White's views on the matter of China differed sharply from those of his employer, Harry Luce (then owner of the Time-Life conglomerate), and so shortly after he left Asia he quit.
He next found employment from a variety of small papers and went to Europe (1948-1953) to detail the demilitarization of Germany and the reconstruction of the occupied countries. This section provides an excellent look at an era in history that has been forgotten by the majority of Americans. Take, for example, the European Joint Defense Force. This was a proposal under which all of the armies of the European nations would be joined as one. Long forgotten, this book sheds some new light on this fascinating proposal.
Next, White returns home to America (1954-1963), where he publishes several books. He next follows Senator John F. Kennedy through his campaign for president up to his assassination. He was an intimate of Kennedy's, and this section of his book provides an excellent look at that era. He tells of the tear-filled meeting between himself and Jacqueline Kennedy shortly after President Kennedy's death in which he wrote the story that was to label the Kennedy years as the "Camelot" era of American history.

This book provides an excellent and in depth look at the world from 1915-1963, from White's (a liberal's) point of view. I recommend this book to the casual, interested, or scholarly reader.