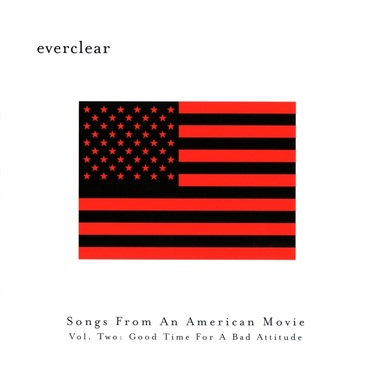 Songs from an American Movie, Vol. 2: Good Time for a Bad Attitude
Everclear

Everclear separated their double album into two different records, isolating the poppier songs (thematically, the courtship songs) onto the first album, leaving Songs From an American Movie, Vol. 2: Good Time for a Bad Attitude as the hard rock record (thematically, the divorce songs, or, as Art Alexakis puts it, "When It All Goes Wrong Again"). This may have concentrated their talents a little bit too much, but it does result in two pretty dynamic, effective records -- albums whose connections only become apparent through close listening, which is a compliment. If Good Time pales slightly to its predecessor, it's because it isn't as sonically varied as Vol. 1, even if it's still quite catchy. And this is the great thing about Everclear's advanced age, compared to their peers -- they not only have a greater musical reach, they are stronger craftsmen, not afraid to give their big riffs big melodies and pacing the record well, even if it winds up being heavy on hard rockers. Yes, sometimes they seem a little out of step -- the Spike character on "Babytalk" seemed just as out of date when Tom Petty wrote about him on 1986's Southern Accents -- but this is still a stronger post-grunge record than most, heavy on heavy rock, fine songcraft, and lyrics. If Alexakis occasionally delves into inadvertent misogyny, he balances it with sharp wit and warm humanity, plus fine riffs and melodies.