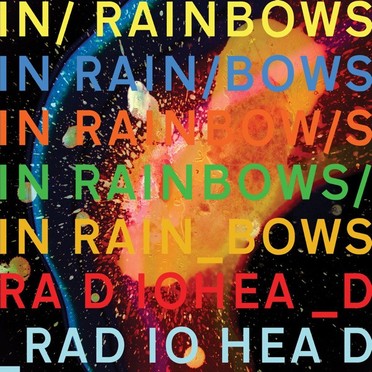 On the deliriously satisfying "In Rainbows", Radiohead returns to a more straight-ahead (though subdued) rock sound. Much hubbub has been made about this record's innovative release. Radiohead allowed fans to pay what they wished to download fairly low-resolution tracks from the band's own website. Like so many innovations, it already seems funny both that it was such big news and that someone else of similar stature hadn't done it sooner. Some pundits were appalled that it took awhile to download the tracks if you tried to do it at the same time as thousands of other people, while others decried that the group was trying to kill the music industry (or save it). Little of the press seemed to focus on the record itself, which actually made sense because it was so entertaining and inviting, the most low-key album Radiohead has made to date. There's even a very straight-forward, simple, silly little love song, "House of Cards." It might be a bit lethargic, but the simple instrumentation of electric guitars, bass, and drums is lovely as heck. A handful of these tunes enchanted fans for years before finally being committed to computer "tape." This is particularly fitting as "In Rainbows" is the group's most "band"-sounding album since "OK Computer". This is not a record that hits you over the head with how far this group is pushing the envelope; it's simply a phenomenal, well-crafted, and exciting album. As soon as it's done, you're playing it again.--Mike McGonigal