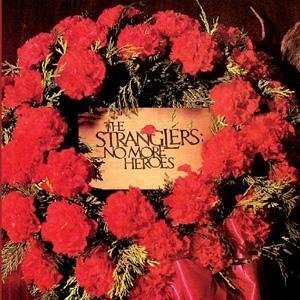 No More Heroes
the Stranglers

"You either love or you despise, there's just no room for compromise" spat Anglo-French bassist Jean-Jacques Burnel on "Burning Up Time." And by the time of No More Heroes--the Stranglers' second album--the battle lines were drawn between those (the press and the women's movement, mainly) who saw the future "men in black" as uncouth sexist pigs peddling aggressive punk Doors music and those for whom the Stranglers were a fantastically melodic, intelligent punk-rock combo, albeit one with a dangerously dry sense of humor and a swift-fingered, pipe-smoking keyboard player.
The former had plenty to complain about. Elderly aunts all across the land must have fainted the day an unwitting DJ played "I Feel Like a Wog" ("out on the dirty shitty jobs") on Britain's state-sponsored Radio One, so it's probably just as well they never got to hear the teacher-pupil relationship smut of "School Ma'm" or the infamously rude "Bring on the Nubiles," which was chanted like testosterone-charged Daleks and featured the word "f***" eight times. Musically, the Stranglers were on a roll--Dave Greenfield's use of Hammond organ and Moog synth coupled with Burnel's sonorous belch of a bass and Hugh Cornwell's not-bothered vocal made them instantly recognizable. And at least half of No More Heroes is every bit as good as Rattus Norvegicus (in fact, most of the album was recorded at the same time). It's also the only Stranglers album to spawn two Top 10 singles, namely the guttural call-to-arms of "Something Better Change" and the iconoclastic title track--a genuine rock classic. --Kevin Maidment